The advent of “America-First” politics is leaving a large geopolitical vacuum for leadership on the world stage. The contenders yearning to fill it are numerous: China, India, and Russia just to name a few. Yet a European nation has taken the longest strides in 2017— France.

Just 18 months ago, almost any analyst would’ve dismissed the thought. After all, the situation in France was dire. Its president had an abysmal 4% approval rating, it had gone through numerous major terror attacks, and nationalist sentiment was overriding political discourse.

Enter Emmanuel Macron. The French “boy wonder”—as Times put it— swept to power against all expectations. He quit his job as economy minister, formed his own political party and ran for high office. Within a year, he became France’s youngest leader at 39, second only to Napoleon Bonaparte who came to power at 35 over two centuries earlier.

The centrist leader took the reins of one of the most affluent nations in a turbulent political landscape. The highlight of his campaign, an appealing model of a pro-business French economy and a globalist, EU-oriented foreign policy, enticed an electorate fed up with growing nationalist influence. Emmanuel Macron and his centrist party La Republique En Marche’s ascent in French politics defied the populist wave in the West and restored optimism across Europe. Political pundits were quick to highlight the restoration of globalist doctrines to the continent and electorates were assured political stability. 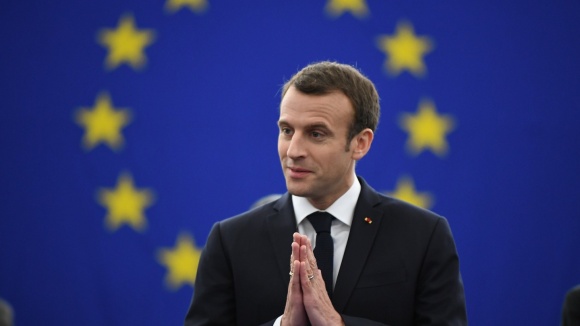 In the months that followed, the initial pomp and circumstance wore out. Macron’s approval ratings fell faster than that of his predecessor. Electoral trust in the newly-elected president wavered. He was illustrated as an authoritarian elitist, contrary to the “people’s man” he initially seemed to be. To add to his woes, his economic reforms were met with disdain and the French weren’t particularly impressed with his jab at the military.

Thankfully for his supporters, Macron could also pull off one of the “fastest approval rating rebounds” which restored his popularity at a dignified 50 percent. Despite his tumultuous favorability, France continued gaining momentum in 2017. Last month, The Economist named France its “country of the year”, a distinction for a nation “that has changed notably for the better in the past 12 months, or made the world brighter.”

Significantly, France stands to gain its influence as a direct consequence of the backdrop against which it operates. Not only has Donald Trump’s policies created a large void for geopolitical hegemony, Europe has become a dismal conglomerate incapable of wielding the influence it did just a few years ago. To add to the disarray, Angela Merkel’s position in Germany has only gotten weaker and Britain’s future remains in the balance after it triggered Article 50 to initiate its departure from the European Union. While the world witnesses the largest rebuke to the Western liberal democratic order since the second world war, France sees opportunity.

Overarchingly, Europe will be Macron’s most important theater of reform. His proposals to recuperate the EU are both vast and radical. In September of last year, he delivered a two-hour long speech in Paris, laying out his vision for a “profound transformation” of the European Union. Among others, his proposition includes establishing a Eurozone finance minister, a joint European defense budget, and the continent’s very own intelligence academy to handle counter-terrorism operations. He said, “Europe as we know it is too weak, too slow and too inefficient. But only Europe can give us the means to act on the world stage as we tackle the great challenges of the day.”

Indeed, these are tall orders and accomplishing them will take more than just Europhilic optimism. Realistically, Macron’s plans are contingent on the backing of Angela Merkel, his reserved German counterpart. Getting Merkel’s endorsement presents challenges of its own. Mere days before Macron’s grandiose speech, Merkel was scraping by with a faltering coalition in Germany. Now that a radical right-wing political party, Alternative for Germany, has become the third largest in the German parliament, the country’s support struggles to keep pace with Macron’s liberal ambitions. Merkel’s hallmark prudence is reinforced by the 12 years she has spent as Germany’s chancellor. Having heard similar schemes from a number of Macron’s predecessors only to witness their eventual dissipation, her reluctance is hardly unreasonable. “Mr. Macron’s danger is that by painting this new Europe in all its integrated glory, he is setting himself a challenge that is impossibly high,” writes Hugh Schofield of BBC.

Reformation in France, and by extension, Europe, under Macron’s rule ceases to be a dichotomy between the political spectrum’s left and right. Instead, he juxtaposes the merits of an “open and closed” spectrum: pitting the social liberals against the cultural conservatives, the globalists at odds with protectionists. In all his glory, Macron heralds the political realignment of France as both economically and politically open.

France’s transition to an “open” society is not absent of perils. A zealous wave of globalization was rebuked by neglected electorates last year and could well be again. As Natalie Nougayrede points out in The Guardian, “Macron will be constantly reminded that he gained only 24% of the vote in the first round of the presidential election. That, and not the 66% he garnered against Marine Le Pen in the second round, was the true measure of his core constituency.” A sizable portion of Macron’s base voted for him not out of admiration for the neoliberal economic reforms he promised, rather out of repugnance for his rivals. Indeed, an Ipsos poll revealed that a substantial share of voters (43%) who supported Macron did so purely to prevent his nationalist, right-wing opponent Le Pen from being president. Given its ambivalence, is France really ready for the globalist ideology he stands for?

Regardless of France’s attitude, Europe remains deprived of leadership. Dubbed “the savior of Europe”, Macron himself dismisses the title. He says, “I don’t want to be the leader of Europe. I want to be one of the leaders, and this new generation of leaders, totally convinced that our future is a European future.” France understands that unilaterally filling America’s shoes on the world stage is far-fetched. Instead, Macron endeavors to emerge as the EU’s unifying force supplanting Angela Merkel who has been fairly reluctant in doing the same.

Diplomatic apprehension between Washington and Paris also originated this year, prominently manifesting itself in Trump’s decision to withdraw the United States from the Paris climate accords. Moments after Donald trump cited “draconian financial and economic burdens” for leaving the agreement, Macron presented his tongue-in-cheek bid to “Make the Planet Great Again.” He welcomed American scientists and entrepreneurs disappointed in the United States to come and work in France. With the move, Macron was quick to shift global attention to himself, pivoting his country to fill the void in global climate leadership.

Macron’s unparalleled approach in foreign policy establishes him in stark contrast to Donald Trump. Breitbart and Fox News have repeatedly called him the “anti-Trump.” To an extent they are right: Macron epitomizes everything Donald Trump despises. On one hand, the young, EU-oriented, globalist and on the other a right-wing, protectionist, xenophobe. Macron dismisses the comparison— “I do believe that we have a very good personal relationship,” he says.

As Ian Bremmer, President of the Eurasia Group put it, “Nature abhors a vacuum, and so does global politics.” The leadership void in the international community’s political and economic infrastructure is bound to be closed sooner or later by a powerful force that reinforces the principles of a western liberal democratic order. Prerequisites for global leadership in 2018 are far from what they were just two decades ago. Instead of bellicose dominance by powerful armies and economies, the international framework requires an emphasis on soft power. Professor Joseph Nye, who coined the term “soft power” said, “power with others can be more effective than power over others”. This ideology is at the backbone of France’s foreign policy.

France’s ascent to the upper echelons of the international order has begun to materialize. The Soft Power 30 report of 2017 ranks the top 30 countries in their abilities to persuade entities to achieve foreign policy objectives. France has propelled itself to the top spot this year, displacing the US to the third rank. According to the report,  “France’s greatest strength lies in its vast diplomatic network. It is unrivaled in terms of membership to multilateral and international organizations, as well as in its diplomatic cultural missions.”

In the 8 months that he has been in office, Macron’s resolve has counterbalanced the instability in the EU fostered by Brexit and the right-wing populism sustained by Donald Trump. In these five years, a successful presidency promises to change the trajectory of international cooperation by putting the EU at the forefront of his new geopolitical order. For both France and the world, Macron augurs an international order the framers of Versaille could only hope for.